Macon – A Macon man was sentenced to 15 years, eight of them in prison, Thursday afternoon in connection with a 2017 shooting on Hawkinsville Avenue.

If the case had gone to trial, prosecutor Sandra Matson would have presented evidence showing:

Johnson’s ex-girlfriend returned home with two friends on March 24, 2017, and found Johnson inside the house, uninvited and without her knowledge. Their relationship had ended at least a month earlier.

The three women confronted Johnson and told him to leave. Johnson became angry, pulled out a gun and threatened to kill the women.

The women coaxed and pushed Johnson outside, but he then fired four or five shots into the house. One of the women was shot in the abdomen.

All three women identified Johnson as the shooter. Tests matched blood on a tissue left at the house to Johnson. The women reported Johnson had a bloody mouth and the tissue when they’d arrived.

Speaking after the hearing, Macon Judicial Circuit District Attorney David Cooke said, “When Mr. Johnson fired multiple shots into this home, he left the fates of the people inside to his heartless game of chance. Now, the only sure thing is that he will regret his actions for years to come while he spends each day in prison.” 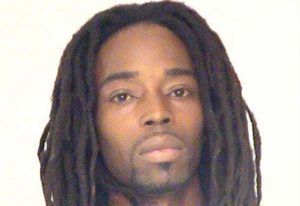