The recognition was announced in preparation for the annual National Crime Victims’ Rights Week, held April 8 through April 14.

Since District Attorney David Cooke took office in 2013, the office’s Victim-Witness Assistance Program has increased services to victims by more than 400 percent and increased staff from two advocates to six. An additional advocate based in Peach County provides services to victims in Crawford and Peach counties.

“Since our administration began, we’ve made victim assistance a top priority,” Cooke said Wednesday. “This award validates the hard work and commitment our advocates demonstrate every day for victims of crime.” 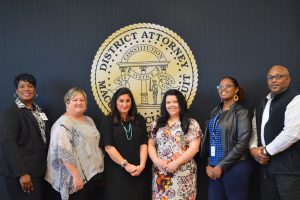 Since Oct. 1, 2017, Bibb County advocates have served 2,216 crime victims, helping them navigate the judicial system and providing support and notification of when court proceedings are set to occur. Advocates also link victims to community resources and advise them of their rights as victims.

One of the office’s advocates also serves as a liaison between crime victims and the Georgia Crime Victims Compensation Program. The program provides money to help pay for counseling, funeral expenses, medical bills and other costs incurred as a result of crime.

The Florida Crisis Response Team was recognized as the winner of the 2018 Tadini Bacigalupi Jr. Award. The Bibb County District Attorney’s Office is one of seven 2018 Honorary Awardees.

The award is named for a San Francisco lawyer who was a founding member of the National Organization for Victim Assistance’s board. Bacigalupi devoted much of his later life to promoting volunteer programs in criminal justice and working to ensure the continued success of the organization.